Three years ago, I entered my local library short story competition. The story didn't win a prize nor an honourable mention - I was disappointed, but, lolz - not a new feeling!

I always wanted to write gritty, urban realism, but found myself more often writing fantasy, probably as an escape from the harsh realities I came across in nursing. However, this story is inspired by memories of when I worked in Children's Emergency. I was always struck by the horror and tragedy of teen suicide. We'd brace ourselves, because often in the following weeks, friends or siblings of the teenager would have attempts as well – sometimes these attempts would end in another tragic death.

In writing this story I wanted to highlight how tragedy can happen, all too easily.

The month before the submission deadline for this competition, I'd pull out the story, work on it, rewrite it, take it to different writers groups for critiquing, try another way of storytelling, really look at the characters (again!), boil it down to nuggets, start over - for three years. But I was never successful.

Until this year - the story won second prize in the Monash Public Libraries WordFest competition!

Thank you, Monash Libraries for encouraging reading and writing, and thanks to the librarians for their commitment to raising awareness of issues that affect our society.

This is a link to the story, but it obviously comes with a suicide/depression trigger warning. 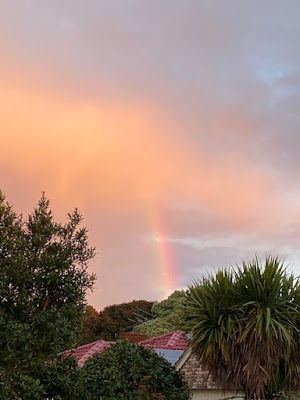 Support is always out there –

Find hope in a new day 💚

Posted by Nikki Bielinski at 21:09 No comments:

Sometimes, during lockdown restrictions, it was hard to find the presence of mind (presents of mind in finding the gift of motivation) to sit down and write. It's one of those itchy feelings, isn't it, when you want to but you don't; you don't want to but you do. I think that's all left brain 'stuff' of over analysis getting in the way of creativity.

So, I'm no great artist, I'm not looking for anyone to buy my simple fun, but splashing a bit of watercolour around in simple images is not only fun, but it finds that spot of calm creativity in the right side of the brain. It's a win-win, as far as I'm concerned. 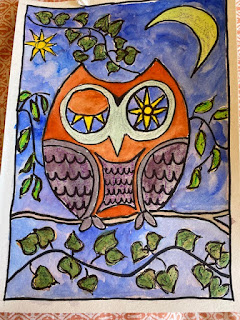 Night owl - in watercolour, marker pen and oil pastel.
I started doing a 'drawing on the right side of the brain' course in order to free up and challenge my writing habits. Ironically, I find writing habits have helped with art - like not being afraid to start again; being able to rough sketch a drawing from several perspectives, find my favourite one and work with that, rather than it being set in stone - this-is-the-way-it-is-and-cannot-change. Writing and art feed into one another. I've also found that with the rough sketching from different perspectives, I'm actually plotting the drawing. For someone who's never been much of a platter in my writing, suddenly, I'm happily plotting!
Win-win. 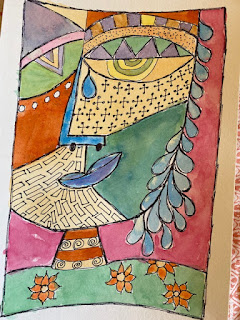 A gentle sadness of lockdown - in watercolour and marker pen.
Posted by Nikki Bielinski at 17:38 No comments:

Email ThisBlogThis!Share to TwitterShare to FacebookShare to Pinterest
Labels: art, Covid, drawing on the right side of the brain, motivation, playfulness, watercolour, writing

It's always good to play, and explore creativity. I love the weekly art class I go to, and I love playing with pastels and not trying to do something perfectly (which is lucky, if you see the finish products). So often in today's society, everything is tick-box perfect, airbrushed to extinction and coated with a pretence of lies.

I prefer a whimsy of hot air balloons over fields of green and puddles of red poppies!
Okay, the poppies actually started out as sheep- that didn't kinda work ;-)

Not a cool name for a synth-pop band, tho.

I think I'd like to coin a new phrase, though..
How about a pastel-lation of hot and balloons? 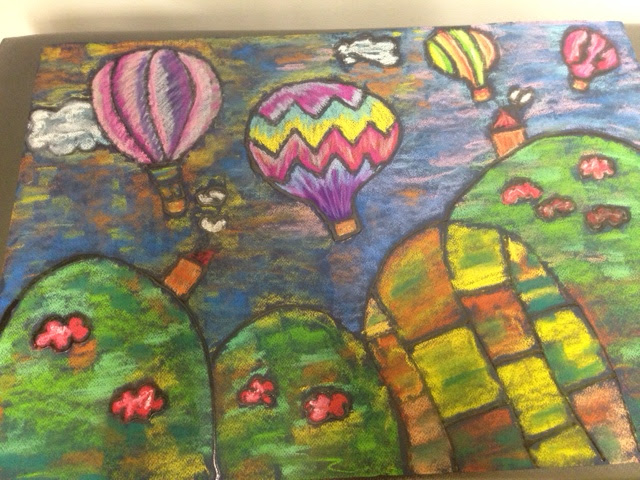 Posted by Nikki Bielinski at 20:46 No comments:


So I meant to publish this Moonrise Kingdom on the previous post, as well  ;-)

Never mind - here it is. 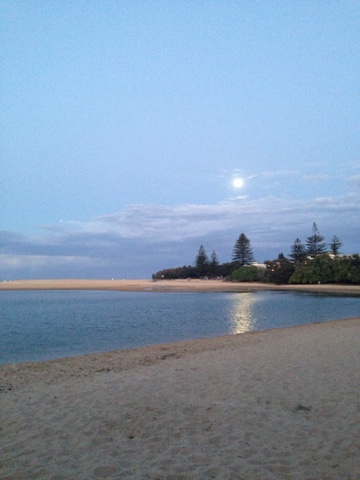 Posted by Nikki Bielinski at 16:13 No comments:

One of the most delightful movies I have ever seen.
The main leads, two twelve-year olds (Jared Gilman and Kara Hayward) from disenfranchised backgrounds, fall in love. The boy, Sam, and his girlfriend, Susie, decide to run away together. They met six months previously and have been having a pen-pal love affair. This story is so innocently sweet, evocative and quirky, that I fell in love with it and want to rave about it.
Sam, the boy, is an orphan and with his latest misdeeds is kicked out of his foster home. He has nowhere.
Susie’s parents have bought a book on ‘coping with the troubled child’ Susie finds it, and what is she to do with this label?

It’s rare, I think, to see a movie that is so fresh in its outlook. Set in the 1960s, there is no slick talking - it’s kids at their survival best. Whether it’s surviving in the woods with Scout skills or surviving a group mentality when the mob turns against you (i.e. the Scout troop).
The kids in this movie are stronger than the vulnerable adults.
Bruce Willis is the defunct policeman who is having an affair with the girl’s – Susie’s - mother (another great performance by the indomitable Frances McDormand).
How are they able to survive in a world where the adults can barely function? The kids have more plans in performing rescues and survival skills than the vulnerable adults have.
This movie works on so many levels, I will still be digesting it the third or fourth time that I watch it. 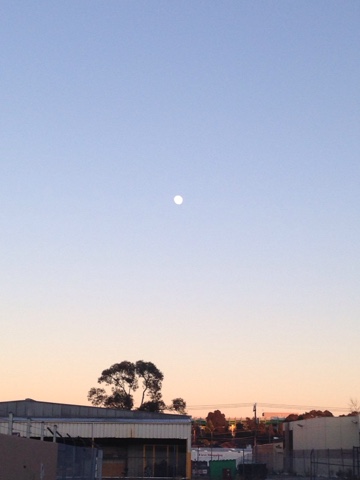 My own, suburban, Moonrise Kingdom ;-)

Posted by Nikki Bielinski at 16:10 No comments:


I love it. Emails, Facebook, watts app, instagram, phone (or fone), so many messaging services and ways of communicating. But when it's not working, run out of battery juice or whatever, we still rely on pen and paper.
Or in this instance, chalk and concrete.

I hope Stacey waited for the call.

or perhaps she wrote her own 'chalk and concrete' reply. Hopefully it didn't rain.

Transient art at it's best.
Otherwise known as 'life'. 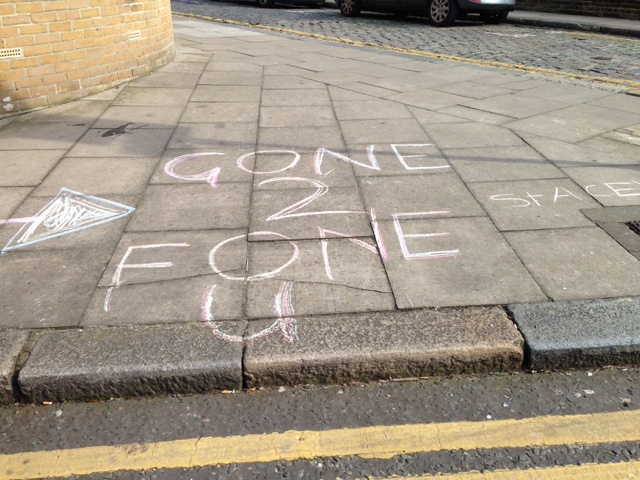 Posted by Nikki Bielinski at 21:07 No comments:

So I'm not much of a Eurovision aficionado. It's just when I'm channel surfing and come across it that I’ll watch a song or two. In between news channels, I happened to catch a rerun of the final. I'd heard that Portugal had won, but hadn't heard the song. It was up next. “Here we go.” I thought, “don't settle into work just yet, watch this.”
I was surprised to hear Salvador Sobral sing a ballad. Compared to the others of razzle, flash, dazzle and rap beats, here he was singing a sensitive ballad written by his sister.

“If anyone ever wonders about me, tell them I have lived solely to love you.”

My Portuguese isn't fluent (non-existent), so I was reading the subtitled lyrics. The love-cynic in me cringed to read the sensitive words of feeling rejected.

“I beg you to come back and want me again.”

"Get up and kick ass,” I thought, “what about some good old-fashioned feisty revenge?” But no, the lyrics continued on in the same sensitive fashion, and every time it was going to sink into self-indulgence it would pull out, in a sweep of honesty. And then came the end -

[(If you can’t suffer the loving)]
“My heart can love for both of us instead.”

This last line made me squirt tears.
Maybe I'm not such a love cynic after all.

"Music is not all fireworks. Let us bring music back which has feeling."
Go for Salvy, go for it.

https://www.youtube.com/watch?v=v0PzWMW3FdU
Posted by Nikki Bielinski at 21:08 No comments: